Reflections and observations on life in general.

We tend to label and categorise everything and everybody, it just seems to come naturally, it seems as ancient as the Biblical verse in which Adam was commanded to name all things. In our everyday situations it is mostly very useful. Even the words I’m using are a form of label, a set of symbols to stand in for my individual subjective experience and understanding of that
experience and that, I’m reasonably confident, you will interpret in a similar way
and we’ll have a workable understanding of what we’re each experiencing and
thinking. Mostly a pretty good system.
I got to thinking about how we label and categorise ourselves and how there are
times when it appears to me that the system is less useful, even harmful. These
questions started to arise in me after listening to some conversations between
people I know and noticing how thinking of themselves in a categorised way seemed to
affect and limit them… myself too, on reflection.
There are a lot of examples in the spectrum of labels and collective words we use,
from those which are helpful to those, like insults, which hurt and oppress. I’m
just going to pick out a few of those I think are in the middle, the positive to
neutral zone, and question their usefulness, or at least at what point they stop
being useful. 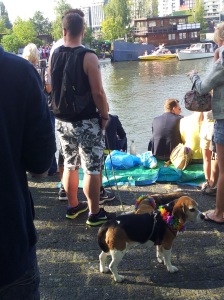 Identity, nationality, gender, sexual orientation, race, role, I see so many
people limit their own options, for example in what relationships they are open to
forming, what opinions or tastes they may admit to having.

It extends to clothing, songs, music, food, so many things in which there is no benefit to these limits. I overheard a comment by somebody a while back, a member of a male gay couple,
‘correcting’ himself after saying that he found a certain woman quite
attractive: “oops, that’s a bid bad for a gay bloke, finding a woman sexy”. The
conversation was light-hearted, full of banter, but still that remark stood out for
me… did he feel he was breaking some kind of club rules? I wondered why he could
not just have that feeling, declared or not, and be free of guilt about it? I had a
sense of self-censorship, self-limiting ideas that appear at odds, to me, with the
hard ongoing struggle for ‘freedom’ to ‘be yourself’, whatever that really means.
Perhaps I just don’t hold on very strongly to tribal identities, nor feel a very
powerful need to, beyond what seems genuinely useful at certain times for practical
reasons – normal conversations, administration, sensible national security, group
cohesion for dealing with crises or tasks. So I can appreciate the long history
that the English, Welsh and Scottish branches of my forbears represent, while not
feeling bound by them to eat porridge with salt in the traditional Scottish way when I find it much more pleasant to add cinnamon and other sweet things…
Similarly, it is possible, and less stressful, to be a ‘man’ and even described as
‘straight’ without having to be aggressive towards others, only appreciate the
beauty of female bodies, always be ‘in control’ and so on, with all the harm that
brings to the world.
So how to loosen the ties of the labels we adopt and use, so that they are no more
inconvenient and constraining than temporary luggage labels?
The sun is shining on a crisp, cool Autumn day. I want to visit a manor,
owned by the National Trust. For a few hours, I will be able to be the ‘owner’, able
to enjoy the manor and estate with little more constraint than those who had it built.
And I don’t have to pay the bills or worry about roof repairs!
Have a good day, don’t let your labels trip you up!

Wolverhampton is looking good  this morning, a fine and crisp Monday, as I ride to work.
Meanwhile the cleaners make the place look smart, brush clacking dustpan; here’s appreciation of cleaners and litter pickers everywhere, you make a difference.

PS: I said “thank you” to them on the way past.