Reflections and observations on life in general. 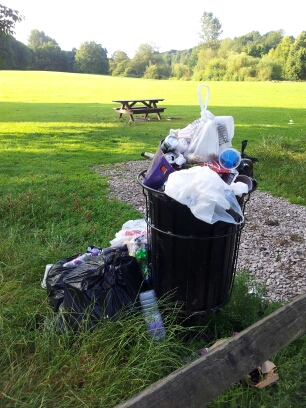 This morning’s walk through the park was a very pleasant experience. It was one of those refreshingly cool, dewy mornings when the bright sun and fresh air lift the spirits and make people more sociable, more inclined to say “good morning” as they pass by.

We saw a woman, I guess in her sixties, carrying what was obviously other people’s litter to an already overflowing bin; yesterday, Sunday, was very busy here in this popular Cheshire town park.

My girlfriend, on her way to work, stopped to thank her for making a difference and we got into a short chat about litter, why people can’t be bothered to carry it to a bin, the prevalence of bagged offerings to the “dog-poo fairy” in shrubs and bushes by paths, and the like. The woman was one of those socially-minded and motivated people who are prepared to do something about a problem, one of the small proportion of the population who take the lead by example and who make changes happen, in spite of others’ reluctance or indifference.

So we moved on, exchanging thanks with the woman, past several bins as over-full as in the photo above, stopping to wonder at the patient night-shift work of a spider, her perfect web catching the early sunlight (I hope she was rewarded with a meal before some happy and unaware dog ran through it later!).

We said our farewells for now by railings hung with luxuriant flower boxes (some Council Tax is well-spent!) and I returned through the park, happy and at ease and inspired to collect a couple more discarded take-away boxes to add to the piles by the bins.

What I felt encouraged by, despite the earlier conversation, was that the bins were full and that the excess was piled alongside them. Clearly the majority of visitors had taken the trouble to put their litter in the bins and, when they couldn’t, at least put it down beside the bin, easy to collect. I think this is a good sign. Most people are ok.

Most people are, at least in my own experience, helpful, reasonably kind, honest and polite, prefer clean surroundings and avoid violent conflict. Sure, a minority who are not cause a disproportionate impact but, today, I feel less inclined to think  “people are so lazy, dirty…” and so on. At least if there are fewer who are causing problems, we have real hope of creating the conditions for them to change; it does demand the effort, like that woman, of each of us taking a turn at leadership and that means stooping to pick up a piece of somebody else’s rubbish.

This was the reward after a good day’s work, climbing with a colleague, Martin, on warm dry limestone on Wenlock Edge.
The first route was an exploration, we set up a top-rope and struggled with the overhanging start, the crux moves of the route. My arms were pumped in the first five minutes, though I made it through to the top. Martin, a better and stronger climber than me, also concluding that more work was needed to be ready to lead this one.

I finished by leading up an easy short route, simply enjoying the process of balancing, choosing a sequence of moves, placing protection, rising step by step above the graceful ash trees to look out over the western part of Shropshire, towards the sinking sun.
I felt calm, alert and relaxed. On the descent back to collect rucksacks, I realised that it was this state, this feeling of calm and balance on a rock face, that is really the reason I climb. It’s not the intense, and tense, adrenaline “rush” that I’ve felt in some situations, it’s far better, far deeper than that.
It’s really like feeling in tune with something, an undertone barely heard for all the other, louder, noise, a steady, clear note that leaves me feeling uplifted and aware, feet on the ground and clean air in my lungs; alive, able to deal with whatever is happening, fully in the present.

I was reflecting upon the deeds people do, good and bad, all the stuff that fills the media, you know the kind of thing all too well, and how the internet has really revealed, for good and ill, the contents of people’s minds.

“The true ‘house of God’, and Satan,  is in our minds.  Which one we choose to make welcome determines both the quality of our actions and of our lives.  We will experience, sooner or later, the consequences of our choice.”

“We can never rid ourselves entirely of the presence of either God or Satan, but if we try to suppress all knowledge of one and banish them to the cellar, they will still make their presence known, and we will have no rest at night.”

I am reminded also of what a friend, a strong convert to Christianity, had said about meditation, that their tradition frowned upon it on the basis that a still mind might “let the devil in” (so why not God too?).. Odd reasoning, no thought of managing and transforming negative thoughts, not to mention implying that the Deity was not quite omnipotent.

So now to allow my mind to rest before bed, and the arising thoughts can run and play like lively children; when they’re done, space and stillness can return.

It’s late, I should have gone to bed by now but my mind’s too active and I made the mistake of looking back through old emails that set more thoughts, memories and associations rolling. Re-reading things I wrote to friends and family about the time I came to the end of my time on a teacher-training course that I withdrew from in order to keep my health and sanity – the first time I’ve ever come off a training course. It was also the time my father became very ill and began his decline. A lot of memories returning, strong emotions too.

Then I remembered something I said to my girlfriend over the weekend, a phrase that just came to mind suddenly when she was feeling overwhelmed by sad memories and stuff:

“Maybe we have to learn to surf on the ocean of tears.”

Time to sit quietly for a few minutes, while cars swish by and arguing drunk people shout at each other in the street – the tide on that ocean is rising…

I wish you a peaceful one.